Dolcenea finished her 99th title at the DAPPR NADAC agility trial today in Black Forest Colorado! She needed one more leg in Touch'n Go and we've been chasing this leg for the last two NADAC trials but it just kept eluding us for one reason or another. 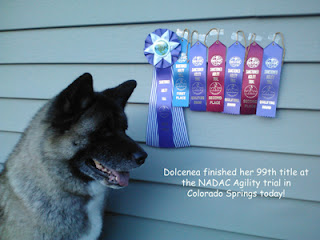 This agility trial was a tough one since I wasn't even sure I'd be able to make it.

Just four days before the agility trial:
I noticed on facebook an Akita rescue group was trying to get a bonded pair of Akita's moved from Wyoming to Washington state but they weren't having any luck. The group was finally going to have to resort to paying $600 to make this transition happen.So on Tuesday I inquired about the transport problems, and the next thing I knew I was volunteering to drive these two stranded Akita's from Cheyenne Wyoming to Salt Lake City, Utah before the agility trial. I just never learn.

I informed all interested parties that I had an agility trial on Saturday that I just couldn't miss since I really wanted to get that 99th title under our belts. So I mentioned to the rescue group the transport would need to happen before or after the agility trial, but it couldn't happen on the weekend of. Unfortunately the decision was made to actually do the transport before the agility trial to meet everyone's schedule!

So on Thursday night about 9:30 pm right after my drop-in agility class with Cheyenne, I drove to Cheyenne Wyoming and met the Torrington Shelter staff with the bonded pair of Akita's, and we were off headed west to Salt Lake City. Everything was going as planned until I was coming to mile marker 209 at Johnson Road just outside of Rawlins and our world came to a sudden stop... literally! Now mind you it's just a little past midnight and for the last ten miles I've been confined to one lane since there is nothing but road construction along I80 in Wyoming. I'm coming over this rise and realize that the semi truck in the distance doesn't look like it's moving at all, as a matter of fact I believe it is PARKED right in the middle of the only lane I have to drive in. So I slow down and this is when I realized yep, not only is the semi truck right in front of me dead stopped, but several other semi's right in front of him are parked, lights out, and the drivers are all standing on the side of the median having a confab. What? I can't believe what I'm seeing!

So I start slowing down way back because I've got yet another semi climbing up my behind just like he's got yet another twenty or more right behind him barreling fast. So we all start slowing and finally come to a stop, and I watch in amazement as the semi(s) behind me all pull up, stop, set their parking brakes, turn off their lights, and all of the drivers climb out of their trucks and walk up and join the party in progress in the middle of the median up ahead. It's never a good sign to see a line of semi's behind you pull up, turn off their lights, park their trucks and the drivers get out and walk away. You know you're in it for the long haul!

I couldn't believe it, the poor bonded pair of Akita's were terrified because we kept hearing semi truck after semi truck setting their park breaks, which is not a quiet thing when they are sitting less than three feet from your vehicle. Then we heard a fuel tank explode and I'm not sure who ended up in whose lap first, but all of us jumped right out of our skin on that one.

Now it's a little after 3:00 am on Friday morning, one day before the agility trial.
The plan was to have the bonded pair to Brent in Salt Lake by 6:30 am, well unfortunately I was a little late, not knowing I80 would turn into a parking lot for 3 hours really put me behind schedule. But I did manage to deliver the two to Brent by 6:45 am. Then I got to turn right around and drive all the way back to Denver to get home in time to re-pack all of my agility equipment I carry to outdoor trials which is ALLOT of stuff. Easy ups, wire crates, water, bags, you name I've got it.

When I finally got passed mile marker 209 on my return trip to Denver, I did see a burned out semi truck but I can't imagine it took 3 hours to put that fire out?


So I got back to Denver about 3:00 pm or so, very long drive to have to make before I had to drive the 2 hours to Colorado Springs for the NADAC agility trial. I did manage a nap after packing the car for the trip to the agility trial.

The NADAC agility trial day is finally here.
So the alarm clock goes of at 5:00 am and I'm so groggy I have no idea what day it is leave alone what planet I'm on. Thank goodness the car is ready to go, all I gotta do is find Dolcenea and we're off. We get to the trial by 7:00 am, spend the next hour setting up our crating spot.

So the trial begins at 8:00 am and this is when I finally heard in the general briefing that the club decided to move the only run we came for Touch'n Go to the very last class of the day! Good grief! If I would have known this very important piece of information I could have slept in and arrived at the trial site about 3:00 pm, instead of having to get up at 5:00 am after the really rough prior 24 hours! If it wasn't for bad luck I wouldn't have any luck at all.

So we settle in and Dolcenea run's great even though it's in the high 80's and really high humidity too! And finally about 4:30 pm we run in the Touch'n Go run we came for and low and behold Dolcenea does a FANTASTIC job and QUALIFIES finishing her 99th title! We finally got home about 7:00 pm, and boy am I glad this is over!


Note to self... stop volunteering!