Draco - The Patriarch has died 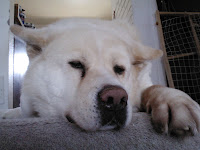 Got a call from the AKC today. The person calling said since Dolcenea is ranked in AKC as the #1 Akita in Preferred for 2011 they certainly didn’t want her to be able to attend their 2013 Nationals. They have gone back and looked at our records and realized she only has 263 speed points, so that’s where they came up with the following idea! To eliminate our ability to qualify they would add 400 speed points to their requirements on top of the 6 double Q’s that have to be earned between the qualifying period, and they knew for sure this new requirement would eliminate our ability to qualify for this event!
Read more »
Posted by Akita Agility at 8:27 AM

No point in going to the 2011 AKC Agility Invitational

Good news: Dolcenea qualified for the Invitational
Bad news: We're not going. There isn't any point when the AKC registers a mix breed dog as an ILP purebred to the detriment of the pedigreed dogs within that breed.
Read more »
Posted by Akita Agility at 8:48 PM

I loaded up the truck and Dolcenea and I drove 14 hours straight through to Marana Arizona for the Desert Dawg Sports first ever CPE agility trial. http://www.desertdawgsports.com/
Read more »
Posted by Akita Agility at 7:51 PM