Everything was so screwed up I really don’t know where to begin the story.
The trial confirmation I received via e-mail stated crating setup was Thursday from 4:00 pm to 8:00 pm, so I left my house at 6:30 am knowing I would have at least an eight hour drive straight through depending on the road construction in Wyoming. I stopped at the hotel first to check in with only a few minutes to spare, and then drove to the trial site to setup. I pulled into the parking lot of the trial site at 3:50 pm with EVERYONE else and walked into the horse barn to find out where we would be crating since there were no details in the e-mail.
There were several women whom I assumed were club members walking around completely confused trying to figure out where to put the crating area. Now mind you we are in a commercial horse facility, with horse stalls (and horses in each one of them) on every wall and with several isles of horse stalls on one side of the building and an indoor arena in the middle of the horse stalls with a 5’5” solid wood plank wall surrounding the arena! 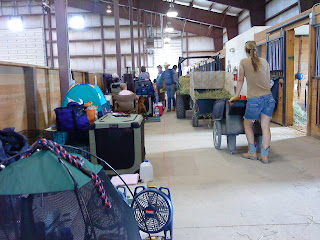 (the above picture shows the isle way for horses, dogs and vehicles that we had to crate in & the arena wall)
Needless to say this is the worst trial I’ve ever attended where the people attending including club members and their friends and family members were the meanest, nastiest and cruelest people I’ve ever met and I certainly will never return to Montana ever again!
No matter where I go for agility trials I ALWAYS find the worst most hateful psychotic horrible human beings on the planet. And I can’t believe that these same people believe they have every right in the world to treat you as rotten as possible and they feel good about it!
And to top of the worst day in agility trial history for me it all had to happen on my Birthday! I hate agility trials!!! And people wonder why I try not to talk to anyone at agility trials….DUGH!
Posted by Akita Agility at 8:39 AM